If you’re wondering who that great drummer is on Another Good Mistake, playing those beautiful Yamaha Absolutes, wonder no more. It’s Chicago based Tom Hipskind and he’s been keeping the beat for over 30 years. Tom studied jazz performance at Northern Illinois University, playing in the NIU Jazz Ensemble and accompanying many jazz legends. He went on to do graduate work at DePaul University. He’s a versatile timekeeper who, when introduced to a new song, almost immediately creates the perfect groove. It’s amazing to watch him in the studio. 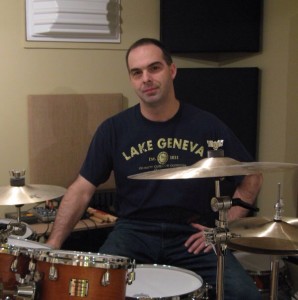 Among Tom’s current gigs: M13, a 13-piece jazz/fusion horn band led by Aaron McEvers and jazz/fusion group Kick the Cat. He can be heard on Scramble, their latest CD.

Tom plays on ten of twelve cuts on Camila Ballario’s Another Good Mistake. Learn more about his doings at tomhipskind.com/.